2Department of Chemistry, College of Arts and Sciences, University of Kentucky, Lexington, USA

Lipids are one of the necessary components which control cellular functions and homeostasis.

The liver plays an essential role in lipid metabolism, several stages of lipid synthesis and transportation 1. Therefore, it is reasonable to expect an abnormal lipid profile in severe liver dysfunction 1. Chemicals constitute an important cause of liver injury. Carbon tetrachloride is the most commonly used hepatotoxic agent for the induction of liver injuries in experimental animals 2, 3. There is a prominent decline in plasma total cholesterol and triacylglycerol levels in patients with severe hepatitis and hepatic failure because of reduction in lipoprotein biosynthesis 4.

Today, a substantial number of drugs are developed from plants which are active against a number of diseases 5.

Dialiumguineense is a medicinal plant used in Traditional Medicine for the treatment of infections such as diarrhea, severe cough, bronchitis, wound, stomachaches, malaria, jaundice, ulcer and hemorrhoids 6, 7. Extracts of the plant are reported to be rich in important phytochemicals 8, 9, 10. At present not much is known about the potential of extracts of D. guineense stem bark to alter lipid profile and histology of rats liver exposed to CCl4. This study investigated the effect of aqueous and ethanol extracts of Dialiumguineense stem bark on lipid profile and CCl4- induced histological changes in liver of Wistar rats.

All chemicals and reagents used in this study were of analytical grade and they were products of Sigma-Aldrich Ltd. (USA).

The stem barks of D. guineense were obtained from Auchi, Edo State, Nigeria and authenticated at the herbarium of the Department of Plant Biology and Biotechnology, University of Benin, Benin City, Nigeria (No. UBHD330).

The stem bark was washed and shade-dried at room temperature for a period of two weeks and then pulverized. Aqueous and ethanol extracts of the stem bark were obtained using cold maceration method as described previously 11.

Adult male Wistar rats (n = 25) weighing 160 – 180 g (mean weight = 170 ± 10 g) were obtained from the Department of Anatomy, University of Benin, Benin City, Nigeria. The rats were housed in metal cages under standard laboratory conditions: temperature of 25 oC, 55 – 65 % humidity and 12-h light/12-h dark cycle. They were allowed free access to rat feed (pelletized growers mash) and clean drinking water. Prior to commencement of the study, the rats were acclimatized to the laboratory environment for one week. Standard experimental protocol was followed for this study.

The rats were randomly assigned to five groups (5 rats per group): normal control, CCl4 control, silymarin, aqueous extract and ethanol extract groups. With the exception of normal control, the rats were exposed to CCl4 (single oral dose of 1.0 mL/kg bwt) 11. Silymarin group rats were administered standard hepatoprotective drug, silymarin, at a dose of 100 mg/kg bwt, while those in the two treatment groups received 1000 mg/kg bwt of aqueous or ethanol extract orally for 28 days.

At the end of the treatment period, the rats were euthanized. Blood samples were collected from the anesthetized rats via cardiac puncture in heparinized sample bottles, and centrifuged at 2000 rpm for 10 min to obtain plasma which was used for biochemical analysis. The liver of all experimental rats were harvested, washed in ice – cold saline, blotted dry and placed in plain containers. Weighted portions of the liver were placed in 10 % phosphosaline (pH 7.0) for histological examination.

Histological Examination of the Tissues

Portions of the liver were serially sectioned and fixed in 10 % formalin for 48 h. The specimen was then dehydrated using varied concentrations of ethanol and cleared in three changes of xylene before embedment in paraffin. Serial sections (4 μm thick) were made and stained with haematoxylin and eosin (H & E) according to standard method. Histological assessment was performed under light microscopy. In every H and E section, a minimum of 25 circular tubules were measured in two axes drawn perpendicular to each other using an image analyzer (Image Proplus, version 3.0).

There were no significant differences in relative organ weight among the groups p > 0.05;Table 1.

Effect of Extracts of D. guineense Stem Bark on Lipid Profile of Rats

The levels of TC, TG, HDL-C, VLDL-C, LDL-C as well as AIP were significantly lower in CCl4 control group than in normal control group, but they were increased by extract treatment (p < 0.05). There were no significant differences in AC and CRR among the groups (p > 0.05). These results are shown in Table 2, Table 3, Table 4. 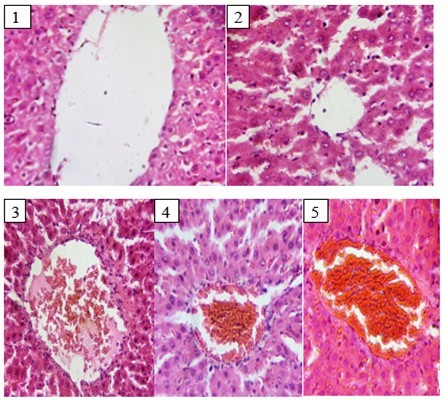 The aim of this study was to investigate the effect of aqueous and ethanol extracts of D. guineense stem bark on lipid profile and CCl4- induced histological changes in liver of Wistar rats.

Lipid profile is a panel of blood tests that serves as an initial broad medical screening tool for the assessment of abnormalities in the concentrations of lipids, such as cholesterol and triacylglycerol. These tests can identify certain genetic diseases and determine approximate risks for cardiovascular diseases (CVDs), certain forms of pancreatitis, and other diseases. Lipid profile typically includes LDL-C, HDL-C, TG, TC, VLDL-C and CRR 12. Abnormal lipid profile is seen in those with severe liver dysfunction 4. There is a prominent decline in plasma TC and TG levels in patients with severe hepatitis and hepatic failure because of reduction in lipoprotein biosynthesis 4. The results obtained in this study suggest that the lipids synthesis ability of the liver may be reduced with CCl4 induction, and are in agreement with those of previous reports 18, 19, 20. It is likely aqueous and ethanol extracts of D. guineense stem bark regulated liver secretion and uptake of plasma lipoproteins. The ability of the extracts to promote lipids biosynthesis could be due to the enhanced transport of acetate into the liver cell, resulting in increased substrate (acetate) availability. Elevated levels of serum TC and TG in CCl4 treated rats has been reported 21, 22.

In this study, the effect produced by the extracts of the medicinal plant was comparable to that of silymarin (standard hepatoprotective drug). Silymarin protects liver against xenobiotic injury by controlling the liver secretion and uptake of plasma lipoprotein, while increasing the intracellular glutathione content 23. Silymarin plays the role of an anti-inflammatory agent, through its ability to inhibit neutrophil infiltration and regulate the release of inflammatory mediators. It has been reported that silymarin prevents CCl4-induced lipid peroxidation and hepatotoxicity in mice, first, by decreasing the metabolic activation of CCl4 and second, by acting as a chain-breaking antioxidant 24. In addition, silymarin is able to stimulate protein synthesis resulting in production of new liver cells to replace older and damaged ones 25.

The toxic hepatic injury induced by CCl4 was significantly blocked by treatment with aqueous and ethanol extracts of D. guineensestem bark. The extent of improvement in lipid profile of the rats may not be unconnected with the dose used. Further studies are needed to assess the predictive values of measuring lipid profile as a means to estimate the extent of liver damage in cirrhotic rats.