Development of the Hand

Development of the Upper Extremıty

Development of the upper extremity begins with the appearance of the upper extremity bud by means of high levels of proliferation in the lower five cervical and first thoracal myotomes of somatopleural mesenchyme due to the effects of fibroblast growth factor 10 (FGF-10) and T-box transcription factor (Tbx5) on the 27. day of intrauterine life 1, 2, 3, 4. Specialized signaling centers that express and secrete many molecules help in determining and development along three spatial limb axes: proximodistal, anteroposterior, and dorsoventral 5. Three specialized signaling centers occur within the growing limb bud: apical ectodermal ridge, zone of polarizing activity, and nonridge ectoderm 5.

Development of the Hand

The development of the hand begins with the flattening of the distal ends of the extremity buds on the 34-38th days of development. Thus, paddle-like hand plates occur 1, 2. Development of the digits begin with the fragmentation of apical ectodermal ridge and on the 46th day of development hand plates take a notched shape and digit rays form 4. Apical ectodermal ridges at the tips of each digit, induces the mesenchyme to condense and transform into the primordia of phalanges 7. As a result of this induction cartilaginous primordia is formed. Transforming growth factor beta proteins (TGFB’s) and activins play a specific role in the induction of chondrogenesis in the digit ray 9, 10, 11. Bone morphogenic proteins (BMP’s) have reciprocal effects in this process. They have both growth promoter 8 and apoptotic effects 12 and the effects seem to take place by the changes in receptor expressions 13. The chondrogenic effects of BMP’s are enhancement of cell adhesion between the cell clusters in the regions of chondrogenesis, increasing of expression of Sry-related HMG box (SOX) genes and matrix production 13. SOX9 expression is the first indicator of verging towards chondrogenesis (Figure 1) 13, 14. 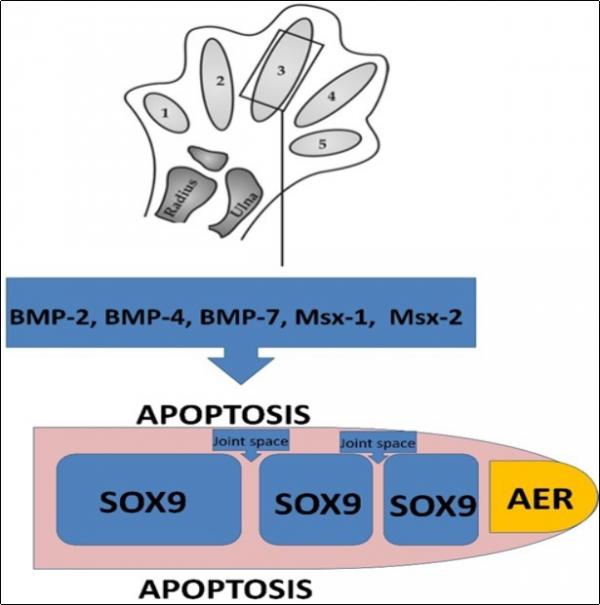 The extracellular matrix plays important roles in chondrogenesis. First of all, it acts as a scaffold for cell aggregation. It possibly effects the local transmission of growth factors both temporally and in concentration gradients. The extracellular matrix components themselves also are present in the developing digital ray at different concentrations. For example, a proteoglycan, syndecan-3, is expressed at high levels restricted to perichondrium in the cell aggregate before chondrogenesis and in the developing joints after differentiation 15, 16.

Spesific phalangeal segments arise as a result of segmentation 3. Activin-Like Kinase 3 (ALK3), a BMP receptor, may play a key regulatory role in joint formation and interdigitation via apoptosis 17. At the 50th day, the digits are webbed 4. The loose mesenchyme between the digit ray undergoes tissue breakdown via apoptosis and at the 52nd day seperate digits form 4, 7. BMP-2, BMP-4, BMP-7, Muscle Segment Homeobox 1 and 2 (Msx-1 and Msx-2) expressed in interdigital areas are the molecules that play a role in interdigital cell death 3. Sonic hedgehog (shh) is the molecule that plays the main role in the determination of digit identity 3 and the formation of digit patterning 2. Ossification of the phalanges occur antenatally. Carpal bones ossify postnatally 18.

The muscles of the hand are thought to develop in situ not by migration 19, 20. Initially, the mesenchyme of the hand divides into superficial and deep layers. Three muscle primordia (radial, middle and ulnar) develop from the superficial layer. Abductor pollicis brevis, flexor digitorum superficialis and abductor digiti minimi muscles develop from these primordia, respectively. The deep layer gives rise to interosseous and contrahentes muscles. The latter develops into the adductor pollicis muscle 20. Tendons, synovial sheets and pulley system of the digits are observed as condensing mesencyme at the 9th week of development. At the 12th week pulleys are identifiable as in the adult 21.

Brachial artery reaches the palm at 16 mm embryo stage. Digital arteries originate from the regressing capillary nets during notching. A digital vessel forms on the two sides of each forming interspace 22. Cells that originate and migrate from the neural crest contribute to the formation of the nerves of the limbs 7. Nerves begin grow into the limb bud at approximately 36th day of development 5.

Development of the hand occurs in a complex manner by various molecular interactions. The awareness of hand development may help in understanding the formation mechanisms of congenital hand anomalies.