Journal of Neurological Research and Therapy
ISSN: 2470-5020
Current Issue
Volume No: 1 Issue No: 1
share this page

The hydatidosis is an endemic illness in regions of the middle Orient, Mediterranean, south of America, North Africa and Australia. The preferential localization of the hydatid cysts is the liver (48%), the lung (36%), and in (4%) of cases it localizes in unaccustomed place as the brain 1, 2. Intracranial localization is a rare condition principally found in childhood.

A 27 years-old male patient was admitted with 1 month history of headache, fever, short term memory lack, aphasia, right hemiparesis and seizures. He had liver hydatid cysts excised 8 years before and was treated with adjuvant medication (albendazole). The neurological examination revealed right central third cranial nerve palsy and hemi paresis, with Babinski sign positive, aphasia and papilledema on ocular fundus. The Glasgow Coma Scale was evaluated to 10/15 (E:3; V:1; M:6). A brain CT scan showed a large left temporoparietal intracerebral multiple and calcified hydatid cysts, important mass effect with midline shift about 7 mm following by an obstructive hydrocephalus (Figure 1). Other cysts were found in thalamic region (Figure 2). The Thoraco-abdominal CT scan showed multiple intra peritoneal hydatid cysts (Figure 3). A left temporo parietal craniotomy was performed in emergency. After corticectomy, using Arana-Iniguez technique, the appearance of the capsule suggested infected hydatid cysts with a purulent material which was aspirated. Numerous hydatid cysts were lifted away and several daughter vesicles were carefully removed without rupture (Figure 4). Macroscopically, the abscess wall appeared to be thick, calcified and tightly attached to lateral ventricular, so it could not be removed. The deep cyst overlying the third ventricle was left.in place. Microscopic examination demonstrated live scoleces, protoscoleces and multiple hooks. These findings are consistent with hydatid cyst (granulosis ecchinococcus) (Figure 5). Bacteriology examination found several white blood cells in the pus (neutrophilia) and infection by streptococcus pneumonia. This was consistent with infection. After surgery, the patient had medication (albendazole, specific antibiotherapy and phenobarbital). The inflammation assessment in the blood showed leukocytosis, a high C-reactive protein rate and increased erythrocyte sedimentation rate. Post operative CT scan was performed and showed the residual calcified capsule and decreased ventricular size (Figure 6). Clinical improvement was achieved after treatment. One month after the initial diagnosis, CT scan of the brain showed no recurrence and a physical examination revealed a neurologically intact, fully functional patient and eyes fundus normal. He was discharged and went to abdominal surgery two months later with complete intra abdominal cysts removal. Albendazole treatment was continuing for six months and radiological exploration was performed by brain MRI with spectroscopy at three and six month later. This showed that infection had resolved and the deep cyst overlying the third ventricle is less spherical (Figure 7, Figure 8). Four years later, the outcome was good. 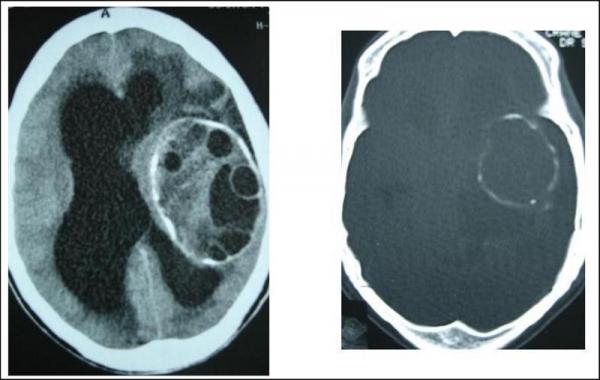 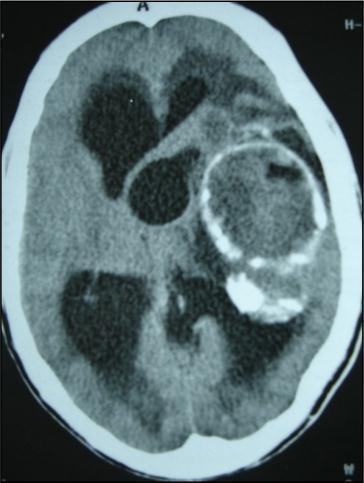 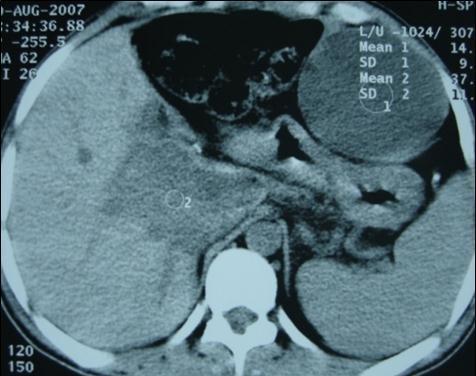 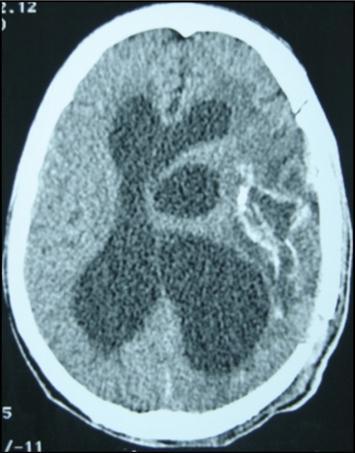 Multiple cerebral hydatid cysts are very rare. In literature, few cases of cerebral multiple location were reported 8, 11, 12, 14. But no case of multiple vesicles in the same capsule was reported 14, 15. It has been long established that the secondary cyst resulting from rupture of a primary cerebral cysts or from liver, lung or cardiac cyst 1, 8, 11. Arana-Iniguez was the first author in 1955 who reported a suppurating cyst with daughter vesicles 3.The only clinical finding in this case was fever four days before operation. Mathuriya reported in 1985 9 a foramen magnum extra parenchyma hydatid infected cysts. He suggested that the source of infection could be either secondary haematogenous spread or, more likely, a retrograde travel from an abscess in the sub occipital triangle. Another infected hydatid cyst located in the occipital lobe was reported by Ugur 15 in 1994; In this case, only one of the multiple cysts was infected. On CT scan and MRI cerebral infected hydatid cyst does no display any specific feature and can not be distinguished from cystic tumor with solid component. For these reasons, clinicians and radiologists need to maintain a high index of suspicion of cerebral hydatid cyst, which must be timely, diagnosed to increase the probability of a successful treatment. The key factor in successful treatment is instituting prompt treatment with adequate antiparasitic agent. The author reported per operatively, the appearance of the capsule suggested an infected hydatid cyst with purulent material. But other cyst has remarkable size without infection. And the capsule formation was like in brain abscess. First of all, among all the multiple hydatid infected cysts of the brain reported in literature, there has been no report of calcification and suppuration in multiple cysts with other remained uninfected 3, 9, 15. But since the advent of CT scan in 1972, hydatid cysts diagnosis is usually based on a pathognomic CT scan pattern and the diagnostic features have been well described 5, 7. Although very rare, calcified hydatid cyst should be considered in the differential diagnosis of any cystic cerebral mass lesion displaying spontaneous capsule hyper density 2, 6, 10. MRI including diffusion and spectroscopy precisely demonstrates location, number, cyst capsule, type of signal and enhancement and allows diagnosis of atypical or complicated hydatid cyst and appears very helpful in surgical planning 11. In our case, MRI and spectroscopy were performed in the follow up. Either, in our case the calcified wall was particular and was not described in the previous reported cases of multiple infected cerebral hydatid cysts. This calcification gives the evidence of a chronic evolution and makes dissection of the wall. Also, it is difficult to determine the source and mechanism of infection. Purulent material found in the cyst supports the contention of secondary infection in the hydatid. Regarding different cases reported, another issue is the recurrence of intra abdominal hydatid cysts after previous surgery for liver ones. This suggests that cerebral location in this case is probably secondary to liver hydatid cysts rupture leading to scoleces metastasis to brain. So albendazole therapy is mandatory to prevent other hydatid cysts seeding in brain or in other sites 13.

Cerebral hydatid cysts can display different radio clinical aspects. But only few cases of multiple, calcified and infected cysts are reported. Our results nicely suggest that surgical resection without rupture associated with albendazole and intravenous antibiotherapy might be valuable in treating of infected multiple cerebral hydatid cysts.