Current Issue Volume No: 1 Issue No: 4

Vaccines symbolize the main pandemic control tool in the world, which is why they are the object of study in many investigations. In this work, the Abdala vaccine was characterized in terms of adverse reactions by conducting a survey and statistical processing of the data taken through distribution graphs of the same, developed in the Minitab software 16. Of the people involved, 47.67% presented Symptoms that were mild to moderate with the presence of pain in the area of the injection, drowsiness and decay, mainly. Based on the distribution of the data in histograms, the duration of these symptoms was approximately 1 day. Likewise, it was observed that the symptoms occur mainly in females, for 33.72% of the cases in the first dose and 23.26% after the second dose was applied.

Vaccines are one of the main achievements of biomedical, with which an improvement in the quality of life of human beings is promoted.

The emergence of the covid 19 pandemic infection represents a challenge from the corresponding authorities and scientists around the world in order to lessen its spread, where some authors suggest a close relationship between demography and this pandemic 1. Early and timely diagnosis and treatment are essential elements, as well as the location of the infected person's contacts. On the other hand, vaccines symbolize the main control tool in the world, so they are objects of study for many researchers 2, 3, 4.

In the country, an integrating role is fulfilled with an innovative approach, both at the national level and in the to achieve progress in this order, as an example of this is presented the development of five candidates vaccination 5, 6. Among these candidates is Abdala, which according to the authors is considered to be 92.28% effective after applying all the established doses 7, 8. This vaccine is composed of a small portion of S proteins, whose active principle is the recombinant Receptor Binding Domain (RBD) protein that allows the interaction of ACE2, its receptor in human cells, a molecule expressed in the yeast Pichia pastoris, adjuvated in aluminum hydroxide 9, 10, 11. According to researchers, it has been shown to be effective in counteracting different variants of the virus 7, 12. However, the literature consulted does not clarify the possible adverse reactions that it could bring with it.

Almufty et al., 2021 emphasizes revealing the potential effects after being applied a vaccine against covid 19, associated with risk factors and comparing the vaccines available in Iraq: Sinopharm, AstraZeneca-Oxford and Pfizer-BioNTech; where 84% of the cases were symptomatic after vaccination. The major symptoms were mild to moderate in terms of severity, most notably fatigue, fever, myalgia, headache, and chills 13. While Abu et al., 2021, in their comparison of the Pfizer – BioNTech and Sinopharm vaccines, states that 46.3% of the participants present adverse reactions in the first dose. For the second dose, the number of symptomatic people reached 48.6%, mainly with the presence of pain in the injection area. Adverse effects were mostly mild to moderate 14.

On the other hand, a study carried out in Saudi Arabia related to the ChAdOx1-S vaccine reports 34.7% of the cases where adverse reactions occurred during the first dose, the main symptoms being pain at the injection site, muscle aches, rash. on the skin, gastrointestinal symptoms and fever 3.

Likewise, the work of Worafi et al., 2021 suggests that all participants experienced to a lesser degree at least one of the adverse reactions taken into account: pain in the injection site, fatigue, headache and fever. These adverse effects, for the most part, were described as moderate to mild lasting between one day and one week 15.

A study carried out by Jeet et al., 2021 in which the adverse reactions of 11 vaccines against covid 19 applied in the world are exposed, as well as the duration of the symptoms, suggests that most of those involved present an intensity of mild to moderate vaccine reactions lasting 3 to 4 days. The most common reactions that occur are pain, swelling, and redness at the injection site. In addition, fever, fatigue, myalgia, and headache were reported 16.

The aversion to uncertainty, the population's concerns about the virus containment measures (quarantines and social distancing) and the new massive vaccination programs are elements that encourage both the interest of the population in science and the trust in it of authorities and decision makers. All of this emphasizes the importance of achieving adequate communication of health-related risks, as well as making informed and well-founded decisions to contain the spread of the virus. The World Health Organization (WHO) recommends that risk communication be transparent, timely, easy to understand, that it recognizes uncertainty in the information, and that it be disseminated through different platforms 17. Hence the need to know, among other elements, the fundamental reactions that vaccinates present for characterization and decision-making.

The literature consulted in relation to the characteristic adverse reactions of the Abdala vaccine is limited due to its recent application. In this work, it is proposed to characterize the Abdala vaccine in terms of adverse reactions, through a statistical analysis of cases in the Edecio Rey Pérez ＃ 4 vaccination center, belonging to the Alcides Pino polyclinic, located in the municipality of Holguín, Holguín province, Cuba, With the help of the Minitab 16 software, it is possible to establish the main symptoms and the duration of the symptoms arising after the administration of the vaccine. For this, surveys were carried out and the information taken by means of data distribution graphs was statistically processed.

A descriptive study is carried out, in which the random sample is 86 patients older than 18 years, who had acquired at least two doses of the Abdala vaccine so far. Informed consent was obtained from the surveyed patients, as well as from the health personnel in charge of the vaccination process.

This section aims to present the elements and methods taken into account for the development of the research.

Collection of Data and Statistical Analysis

For data collection, the survey is applied as an instrument. The variables used during it were: sex, age, personal medical history, acquired dose, and the most frequent adverse reactions. In addition, the duration of these symptoms is considered.

The survey was carried out at the ＃ 4 Edecio Rey Pérez center in the town of Alcides Pino in the municipality of Holguín.

The statistical method to apply for the analysis of the data is fundamentally the graphical method. For this, the Minitab 16 software is used, which is considered an effective statistical tool by several authors 18, 19, 20.

A total of 86 people participated in the study, where approximately 32.55% had one or more underlying diseases. Table 1 shows the pathological antecedents found and the number of patients who suffer from it.

Table 1. Chronic diseases and number of people who suffer from it

The results are divided into two groups based on the first and second doses received of the Abdala vaccine.

47.67 % of the cases presented symptoms of some kind after the first dose of the vaccine. Figure 1 shows the distribution of these perceived symptoms in the participants, in percentage terms.

Figure 1. Percentage distribution of symptoms in patients after the first dose 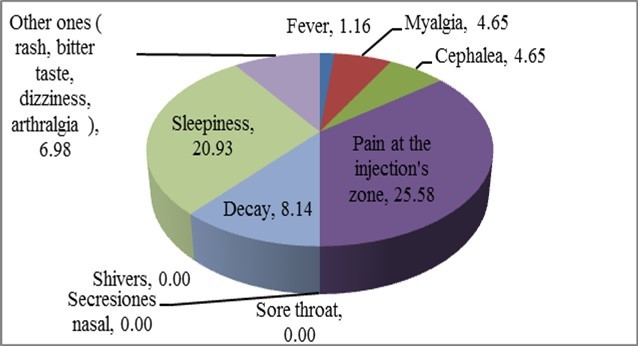 The existence of several conditions can be seen in this first dose, where pain in the injection area and drowsiness prevail with a representativeness of 25.58 and 20.93% of the cases involved, respectively. Chills, runny nose, and sore throat were not present at this dose.

On the other hand, the second dose caused adverse reactions in around 26.75% of the patients, whose distribution is shown in Figure 2.

Figure 2. Percentage distribution of symptoms in patients after the second dose

Note that most people suffer for a day, with 82.5% of cases.

Figure 3. Histogram of the duration of symptoms in the first dose 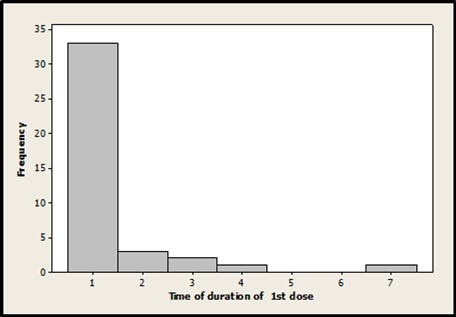 Figure 4. Histogram of the duration of symptoms in the second dose 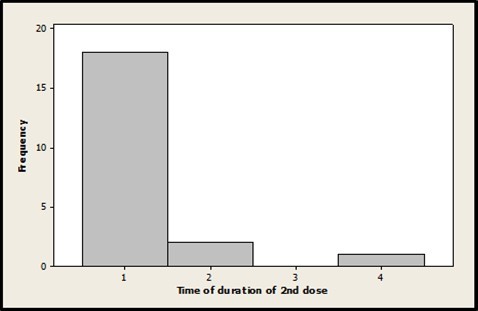 Age in this type of study constitutes a considerable element, since the organism's reaction to a foreign agent behaves differently for different stages of life.

The distribution of people by age groups with symptoms after the application of the vaccine is shown in Figure 5. 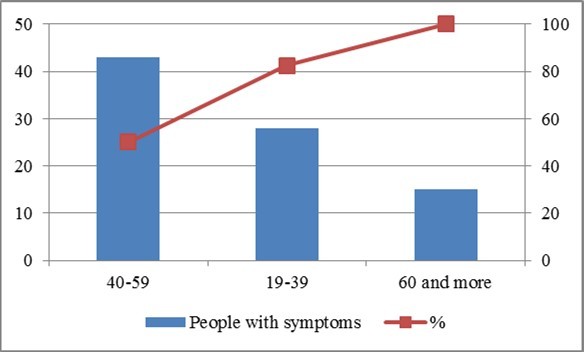 Note that the age group 40 -59 is considered the most representative in terms of symptoms with approximately 50% of cases.

Of the total number of patients, there were adverse reactions described in 33.72 and 13.95% for the female and male gender, respectively, with the application of a first dose of the vaccine. The distribution of symptoms is presented in figure 6 and figure 7, for women and men, respectively.

Figure 6. Symptoms in women during the first dose 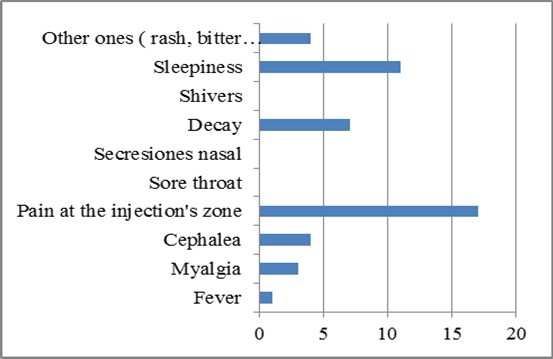 Figure 7. Symptoms in men during the first dose 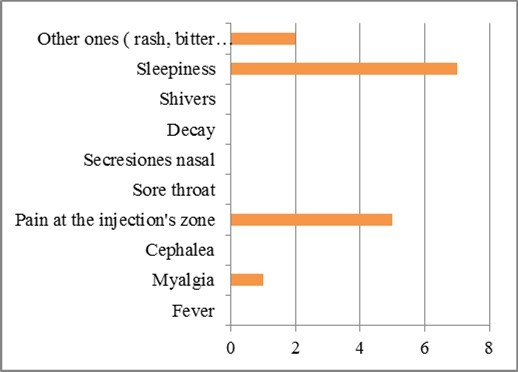 In both cases, pain at the injection site and drowsiness stand out as the main symptoms during the first dose.

In the second dose, for females, the most prominent pain symptoms remained in the injection area, as shown in figure 8.

Figure 8. Symptoms in women during the second dose 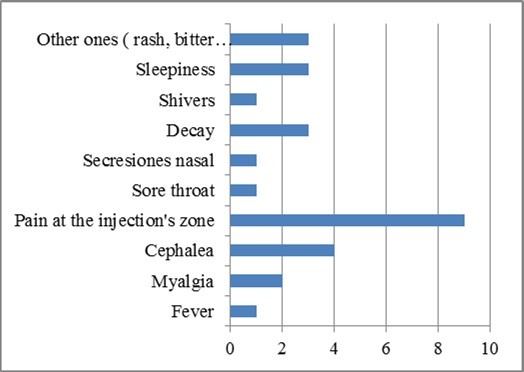 Headache remained second, followed by decline, drowsiness and other symptoms.

In men, drowsiness was mainly present with the application of the second dose, as shown in Figure 9.

Figure 9. Symptoms in men during the second dose 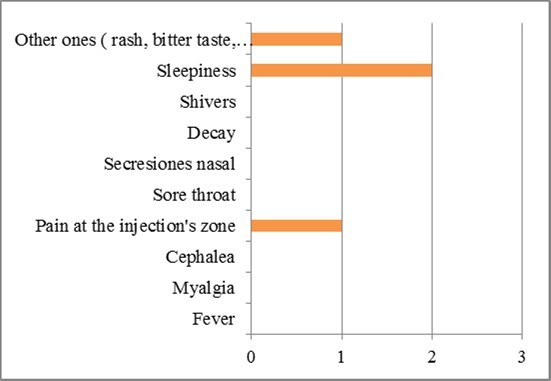 Symptoms were mild to moderate in all involved cases, both in the first and second doses.

The application of the vaccine produces adverse reactions in 47.67 % of the patients, in which pain in the injection area, drowsiness and decay, which were mild to moderate, is mainly appreciated. In more isolated cases it can cause headache and myalgia. In this way, the Abdala vaccine is characterized in terms of adverse reactions.

The duration of symptoms is approximately 1 day, present in 82.5 and 85.71 % of cases for the first and second dose respectively.

The symptoms are more frequent in the female gender and pain in the injection area stands out.