Tropical cyclones are compact, circular storms, generally some 320 km (200 miles) in diameter, whose winds swirl around a central region of low atmospheric pressure. The winds are driven by this low-pressure core and by the rotation of the Earth, which deflects the path of the wind through a phenomenon known as the Coriolis force. As a result, tropical cyclones rotate in a counterclockwise (or cyclonic) direction in the Northern Hemisphere and in a clockwise (or anticyclonic) direction in the Southern Hemisphere. 10,11,12,13,14,15

The occurrence of cyclones is relatively common for the region at this time of year, but the recent phenomenon has been exacerbated by other meteorological and atmospheric factors. This phenomenon, with this feature to lower the pressure inside quickly generates very strong winds and so that name of explosive cyclones. 6,7,8,9,10 For large-scale occurs, the subtropical cyclones influence and are influenced by the weather and other atmospheric phenomena point of view, the call synoptic condition.

In mathematics, a spiral is a curve which emanates from a point, moving farther away as it revolves around the point. 16,17,18,10,19 The characteristic shape of hurricanes, cyclones, typhoons is a spiral 20,21,22,23,24,25,26. There are several types of turns, and determining the characteristic equation of which spiral the “cyclone bomb” (CB) 27fits into is the goal of the work.

A large and powerful extratropical cyclone with an aspect that impressed today in satellite images was acting during this Wednesday in the Atlantic Ocean east of the provinces of Tierra del Fuego, Chubut and Santa Cruz, in Argentina, and over the Falkland Islands. This cyclone caused strong winds in the Patagonia region with wind gusts in some points approaching 100 km/h (62.1371 mi/h, 53.9957knots). Mount Pleasant Airport, in the Falklands, had an atmospheric pressure of 985 hPa with rain showers and wind gusts of around 80 km/h (49.7097 mi/h, 43.1966 knots). (Adapted Authors) 3

The extratropical cyclone at the height of the Falklands had a minimum central pressure of 970 hPa on Wednesday morning, so it is an intense and deep system. It is not an unusual event, since around Antarctica there is a so-called belt of low pressure and more intense cyclones are common in places further south of the Atlantic. (Adapted Authors) 3

In regions closest to the cyclone, such as Patagonia, gusts of wind that will reach speeds close to 100 km/h have already been recorded. Meanwhile, Mount Pleasas Airport, recorded rain showers amid a rain, and wind in the Falklands, of 985hPa. According to MestSul, thousands of miles from the Brazilian south, the cyclone will be responsible for a friar in the southern states. As a result, Rio Grande do Sul, Santa Catarina and Paraná can locally rain heavily and isolated storms in several regions, between today and tomorrow. 3

The ellipsoid shape of the subtropical cyclone is verified at 10:40 (UTC) on March 09, 2022 at 13:40 (UTC), when it passes between the south of Argentina, on the east coast, and the west of the Islands of Falklands. At 14:40 (UTC) it becomes spherical, already north of the Falklands Islands until 18:40, where from 19:40 on March 9th until 05:40 on the 10th it remains ellipsoid. Its ellipsoid shape whose eccentricity increases as it is pushed - pressed - by the high pressure area coming from the Amazon region, which crosses Paraguay, Mato Grosso, Mato Grosso do Sul and southern Brazil, entering the Atlantic Ocean towards the southeast. The cyclone nucleus presents the form of a double spiral,

The EC core (Bomb Cyclone) forms in the extreme south of Chile/Argentina, Punta Arenas region, Ushuaia, respectively. With an initial atmospheric pressure of 990mb, on March 08, 2022, 12:00 (UTC), coordinates xxxx, moving northwest of the Atlantic Ocean. Passing between this “strait” of the extreme south of South America and the Falklands Islands, without any storm in the continental region.

Data in Table 1 were obtained by analyzing the Figure 7.

Figure 1. Satellite image of Powerful extratropical cyclone over the Falkland Islands in this Wednesday, March 9, 2022 am. Source: 28, 29. 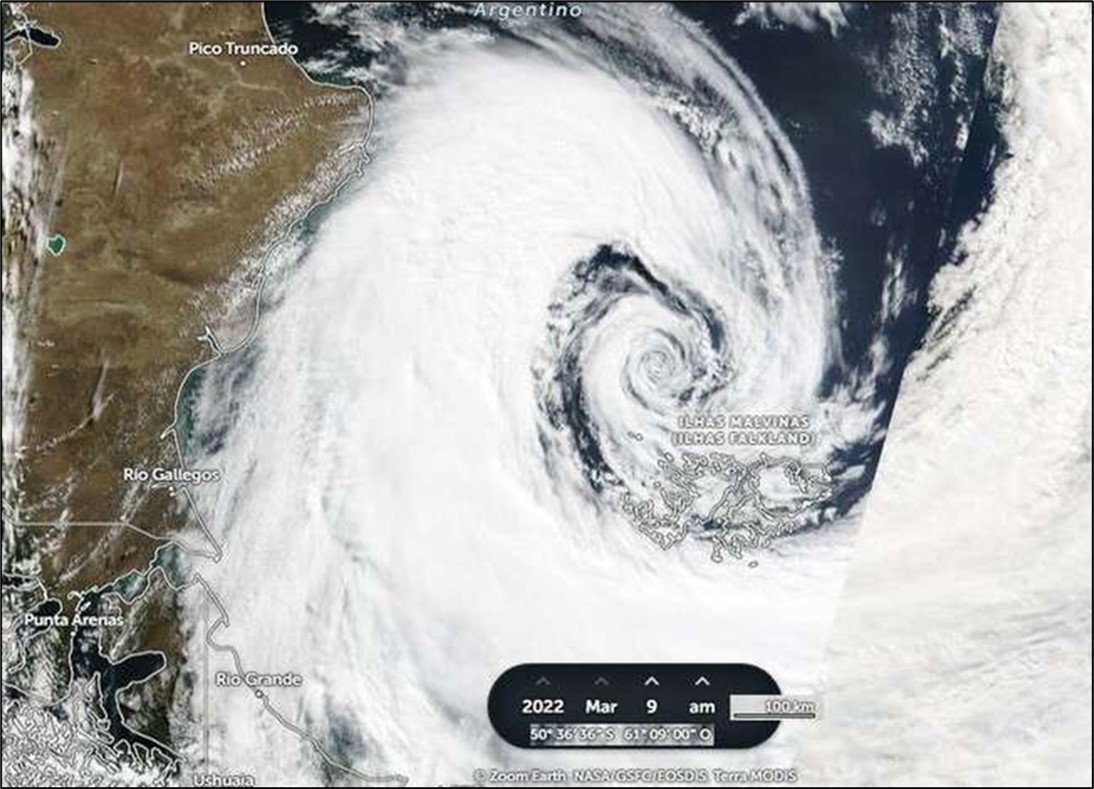 Figure 2. The extratropical cyclone at the height of the Falklands had a minimum central pressure of 970 hPa on Wednesday morning, so it is an intense and deep system. It is not an unusual event, since around Antarctica there is a so-called belt of low pressure and more intense cyclones are common in places further south of the Atlantic. 3, 30 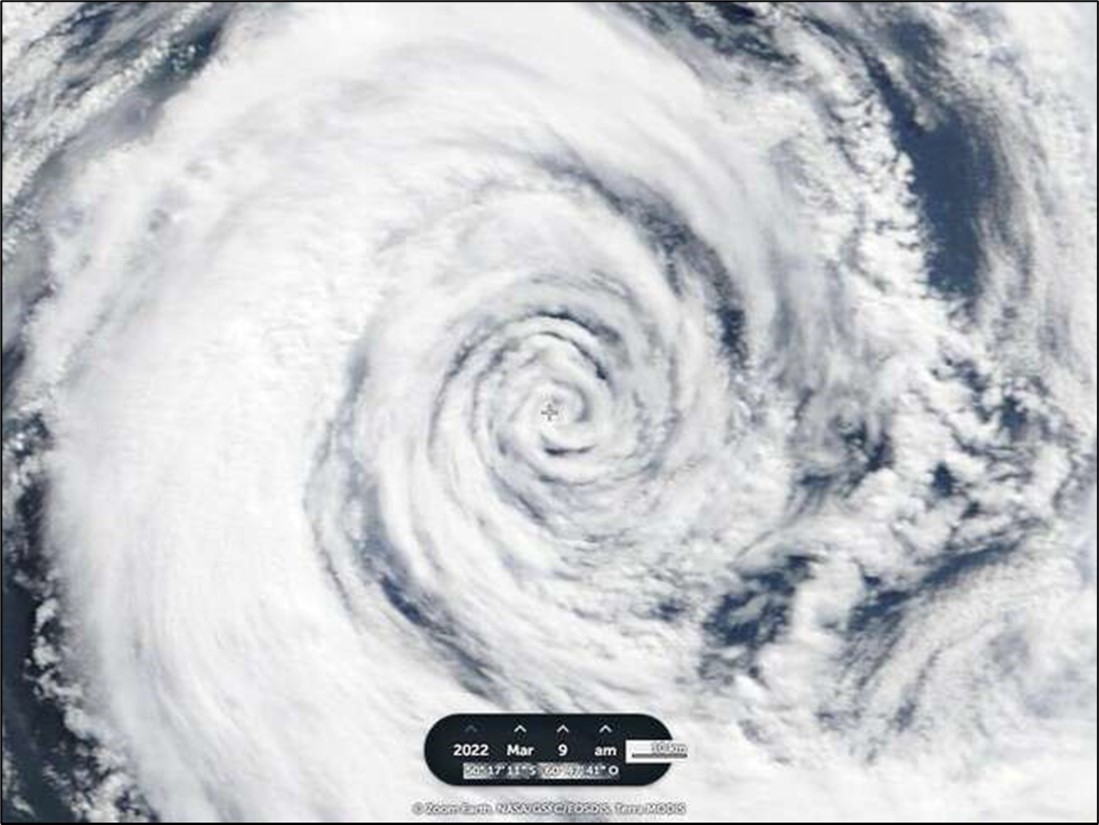 Figure 9. "The application to the permanence of the spiral structure in galaxies arises because the outermost part of an arm will be attracted by, and will tend to become assimilated with, the neighbouring parts of the inner structure. In an analoguos way matter close to the nucleus will have a tendency to be assimilated in an outward motion with the inner parts of the spiral structure. The two regions of circulation is given here. We may suppose that there are two points F in the structure where the angular motion ωF is equal to the local circular angular velocity. We can introduce a coordinate system which follows ωF centre. The successive inter-sections with the diameter through the points F are indicated by the letters D, E, F, G. We make the supposition that, as long as the mass of III is small, the motion of particles in the arcs II is circular motion in the general gravitational field. The gravitational force from the interior spiral structure will not appreciably change the radial direction of the general field, of which it will form an integral part.", (Lindblad, 1964). 30 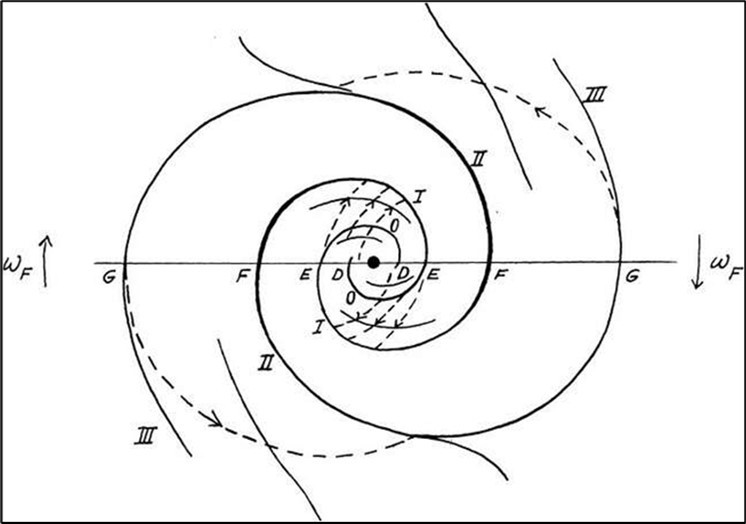 Figure 10. Graph built with the data collected from Figures (1) and (2). The graphic depicts two spirals, constructed with the coordinates of the atmospheric pressure gradients by the wind speed tangent in the vortex of the extratropical cyclone that passed north of the Falklands Islands. Source: Authors. 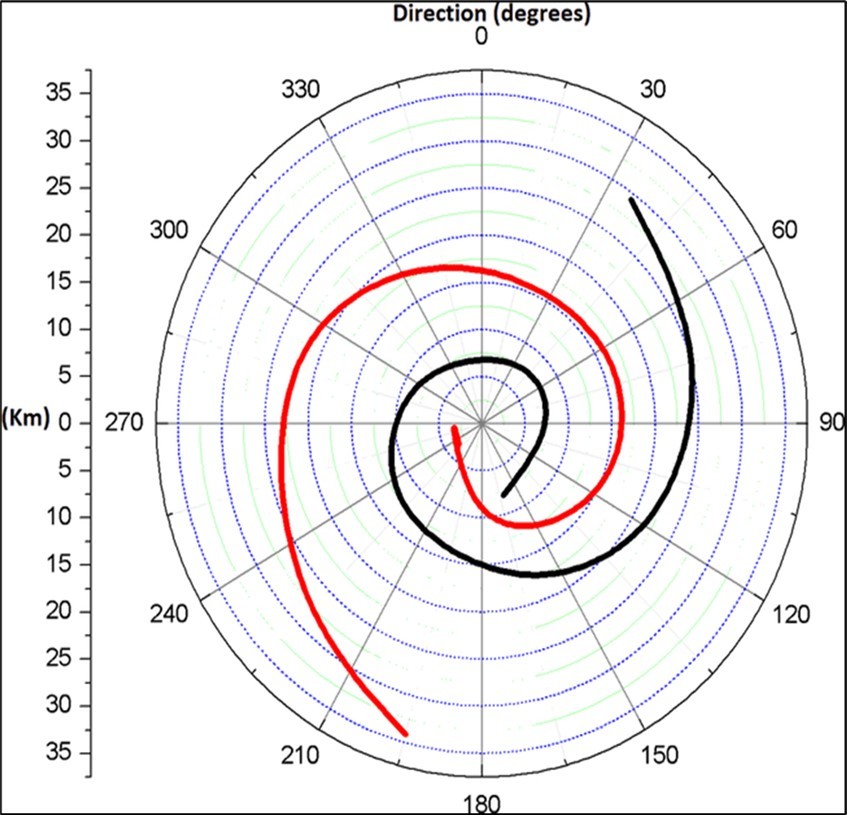 As stated in the introduction the characteristic shape of hurricanes, cyclones, typhoons is a spiral. In mathematics, a spiral is a curve which emanates from a point, moving farther away as it revolves around the point. 33,34,27,35,36, 37,38,39

After an analysis of the different types of spirals , it was found that the shape that came closest to the EC spiral, Figure 1, is a "Cotes’s Spiral." 33,34,27,35,36,37,38, 39It was determined the mathematical equation of the shape of the extratropical cyclone, being in the shape of a spiral called "Cotes’s Spiral" 27

where μ is a positive constant. There are three solution regimes,

Where A and ε are constants, and h is the specific angular momentum 26. The case μ > h2 gives an epispiral, while μ = h2 leads to a hyperbolic spiral.

Analyzing the shape of the Spiral shape called "Cotes’s Spiral" for μ < h2. 24, 25, it appears that adding two constants to Equation (3) makes the necessary adjustments for the Isobaric ones.

In the case of CB, the spiral that gives the solution to a radial force law is given by Equation (1):

An adjustment in Equation (3) is necessary to obtain the B ≠ 0 graph of Figure 7. Then, adding the constants and C where for μ < h2.

In this Figure 9 the shape of the EC is represented, using as a parameter the isobaric ones observed in Figure 1 and Figure 2.

An “explosive extratropical cyclone” is an atmospheric phenomenon that occurs when there is a very rapid drop in central atmospheric pressure. This phenomenon, with its characteristic of rapidly lowering the pressure in its interior, generates very intense winds and for this reason it is called explosive cyclone. It was determined the mathematical equation of the shape of the extratropical cyclone, being in the shape of a spiral called "Cotes’s Spiral." In the case of EC, which formed in the south of the Atlantic Ocean, and passed through the south coast of Argentina and Falkland Island.

The temperature in the center of the EC is approximately 20◦C at 00:00 UTC, March 9, 2022, of at 12:20 UTC, in the low pressure center of the EC, the temperature varies from 20◦C to -30◦C, indicating that the CE increases in size and further tapers its core, sucking a great amount of steam to high altitudes of water where it condenses quickly.

Figure 8 to demonstrate the structure of spiral galaxies demonstrates a double spiral of Lindblad (1964) 30.

The Figure 9 show the graphic depicts two spirals, constructed with the coordinates of the atmospheric pressure gradients by the wind speed tangent in the vortex of the extratropical cyclone that passed north of the Falklands Islands.

The Figure 10 represents the three possible shapes of the Cote’s spiral. The data indicated that the EC presents the form of the equation (4), Gobato et al. 27

The subtropical cyclone originates on March 08 at 12:00 UTC and disappears on March 11 at 12:00 UTC, that is, in approximately 72 hours its climatic influence takes place in the extreme south of South America, and under the Falklands, heading west.

Despite the data obtained in the extratropical cyclone (EC) that passed through the southern tip of South America west and east of the Falklands Islands, everything indicates that the short occurrence ECs indicate the double spiral structure, like Lindblad (1964), but with the structure of a Cote’s double spiral.